[The below was originally published for members of our Library Wine Club.  If interested in learning more about a subscription to this (or any other) wine club, email matthew@vanderbilt.wine, and he'll get back to you with more information.]

If you’re anything like me, the jump from December to January is a blur.  When I come out on the other side, I’m wonder: what happened to last year? What’s going to happen this year? Is this an end? Is this a beginning?

Of course, the answer is both: the beginning is the end and the end is the new beginning.  The wines we’ve picked this month perfectly encapsulate this duality. And this is the most excited I’ve ever been about the wines we've selected.

We’re sending you two well-aged wines that typically bookend meals: one is a fortified wine, a Port; the other, a Champagne.  Most people would tell you to pop the Champagne with appetizers, and those same people will tell you that Port is a dessert wine, best enjoyed with cigars.

We are not most people.  This month’s wine club asks you to consider reversing standard practice: it’s time to put the end at the beginning; it’s time to start at the end.

Did you know that Champagne pairs better with bone marrow than strawberries? That it cuts through a rich steak better than most Cabernets?  And did you know that Port is a great aperitif, largely because of the acidity? Throw some stinky cheese on a plate with figs and walnuts next time company comes over and pop this bottle before dinner.  It doesn’t take much of it to warm you up, to relax the conversation, to get you ready for a rich meal.

If you’re not excited yet… here’s the kicker: the Port is from 1977, one of the vintages of the century.  The Champagne is from 1988, and it’s the tête de cuvée from Perrier Jouet.

Here’s hoping every ending has a beginning this good.

These bottles have impeccable provenance, professionally stored
- at the vineyard, in private storage, or by the importers -
since release. 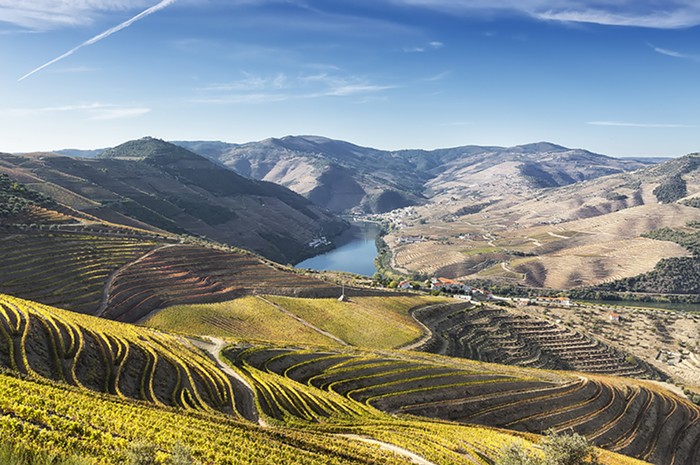 Eric Asimov, the NYT Wine Critic, perfectly sums up the problem with Port as it relates to 99% of wine drinkers: “Before dinner is too early; after too late.”  He’s right; that’s the way most people think.

Here I am in 2019 asking you to think differently.  After all, many people love a Manhattan before dinner, a drink that has much of the same structure, flavor and alcohol levels as Port.  Both are slightly sweet, taste like oak and raisins, and marry acidity plus fruit in a complex way.  Port can also show a burnt orange rind note that instantly reminds me of my favorite bartending trick.

For most, Port is a grace-note that adorns other melodies; it’s not the melody.  And to the lion’s share of wine drinkers, all Ports taste the same, which is not surprising considering where Port is from & the history of making wine in that region.  In their eyes, Port is not a varied thing, like, say, Chardonnay, which can be planted anywhere and could be made in every conceivable style. This is because Port isn’t a category of wines, it is single style of wine from one place.  Most differences between bottles have to do with aging (before or after bottling), with vintage (vintage or non-vintage), and sometimes with the vineyard (most are blended across vineyards, some are from single quintas).

Additionally, there is no real craft movement in Port.  Generally speaking, there are the top-tier houses (Grahams, Dow) and then everyone else.  There is no allowance for small producers, and there are even laws that actively suppress the creation of Port houses.  According Portuguese law, “new producers must have a minimum stock of 150.000 litres before they are allowed to buy grapes to produce Port or bulk stocks on the market” (Van Zellers).  That's 200,000 bottles of self-grown grapes before they're allowed to do what every other house does in oceans... buy grapes!

But to any serious wine drinker, Port offers an opportunity that few other wines can offer.  The bottle we’ve selected this month is 50 years old and tastes nearly as fresh as the day it was bottled, a fact that melts my mind.  In researching this wine, I spoke to some people who recommended holding this wine for 20 more years.  Personally, that seems a little crazy to me.  But when you list the best

The wine will also stay fresh after it’s opened, which means it’s a wine that you can return to again and again, each time with a clear head.  Once you’ve bought a bottle of port, you’ve opened a door that will remain open for a while.

I am not going to wax poetic about this bottle, but I’ll say this: it’s not the kind of wine that we typically offer this club.  For starters, it’s 30 years old, which makes it (aside from the Port we’ve paired it with this month) the oldest bottle we’ve ever sent.  It’s also the first rosé we’ve sourced for you.  It’s a different type of wine than we usually focus on: this house is not a part of the recent grower Champagne movement; this is a big house that makes a lot of wine and has been doing so for a long time.

Perrier-Jouët is based in Epernay, and was founded in 1811 by Pierre-Nicolas Perrier and Rose Adélaide Jouët.  The house makes over 3,000,000 bottles a year. They do grow most of these grapes though, across 266 acres of vineyards in the entire region, with more than half in the Grand Cru villages of Cramant and Avize.  They don’t have much to prove or improve upon - they’ve been at the top of the class pretty much since their conception. This is their tête de cuvée, or “first” wine - the one they only make in the best vintages, the one that gets the longest aging before release.  It’s their best effort.

Before you drink the wine, the bottle will strike you - it’s truly one of the most beautiful bottles in the world.  It was designed in 1902 by Emile Gallé, one of the Art Nouveau movement’s stand-out artists.  The bottle was too expensive to use when it was first conceptualized, and the design wasn’t put out into the market until 1964, the first vintage of Le Belle Epoque.  The splash of anemones wreathed in gold is meant to embody the floral and delicate style of wine that the house strives for.

1988 was a great vintage (a slightly wet September was the only strike against it) and  it produced concentrated wines capable of going the distance. This wine is just now entering its mature phase, and I would advise drinking in the next year or so.  I also suggest that you consider this a food wine. My colleague Jake drank this for his birthday a few months ago (it’s his birth year wine!), and spoke about how fresh and vibrant it was, with only the slightest signs of oxidation.  It opened up over the course of several hours, I’m told, and it remained well-composed the entire time. It will pair marvelously with whole lobsters, mushroom risottos with truffle, bone broths and dry aged steaks.